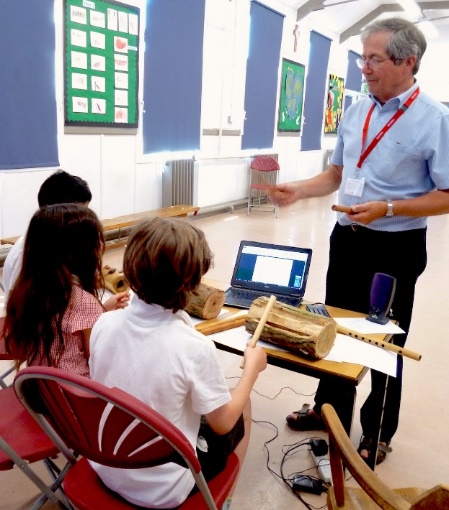 As part of the HENGE project I was invited to run a couple of workshops for budding composers at St Birinus School. Other workshops at the school during the week were: Miranda Creswell and David Burns making sketchbooks and writing poetry, Sophia Stewart-Liberty and Rosie Southon making stone age paintings.

I met three pupils, from years 4 & 5, and first we started by talking about what goes into a song: the words, which had been supplied by David Burns, the rhythm, and the melody.

By reciting the words over and over the students were able to decide which syllables should be stressed and by accenting these we developed the rhythm of our song. Sian thought the music should be in three beats to a bar and we could achieve this by alternating short notes with long notes, “I hear the moan of wind in branch-es” etc. We then went through the rest of the poem in this way so we had the makings of a tune, albeit on one note! Next we decided where it should go up or down. Among other suggestions, Orvil thought it should go up at the end of the first verse and down at the end of the piece, so now we had a complete melody with rhythm and pitches. 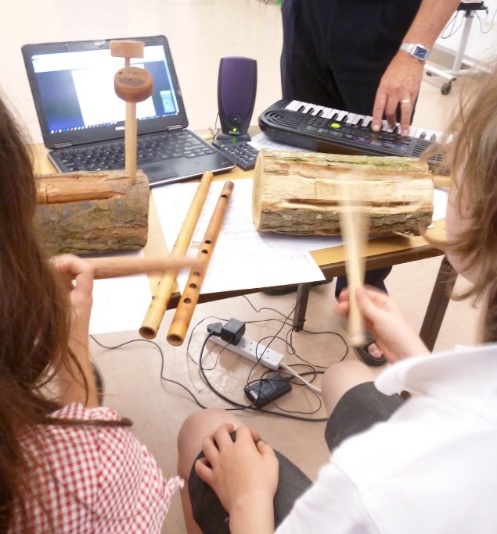 At the end of the session we needed to decide what instruments it should be played on. Bryn was keen on bagpipes so we used them for the first verse. The second verse is about a flute so that was an easy decision, and later on there is a line “I bang my drum with stick and stone” so that was easy as well. By the end of our first session they had composed a melody and all I had to do was add a bit of accompaniment which I put on a harp to match the flute.

For our second session we talked about stone age instruments and used them to play our song and do a bit of drumming practice. In any musical performance players have to develop the skill to listen at the same time as they play so the music stays together, and group drumming is a good way to develop this skill. 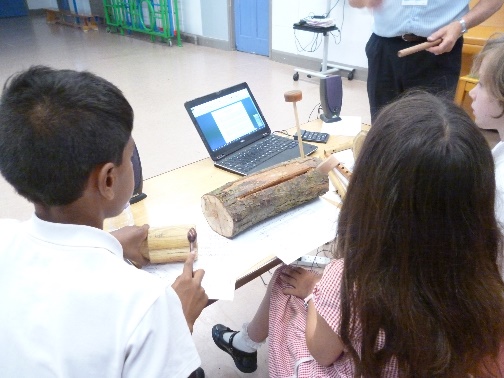 In the first picture Bryn and Sian are playing log drums. In the second one Sian is playing the tune they had composed on a bamboo flute, like the ones on the table, which probably sounds a bit like the bone flutes that have been found dating from the Stone Age. The third picture shows Orvil playing a cup drum with a log drum on the table

They were very interested in the composing software I use, Sibelius, (which is quite expensive) but I pointed them to MuseScore which is free to download and ideal for first-time composers. I hope they will continue with their composing and playing and I am always ready to help if they get stuck.