Oxford to Cambridge Expressway- A New Phase of Campaigning

*Information shown as at September 2018. 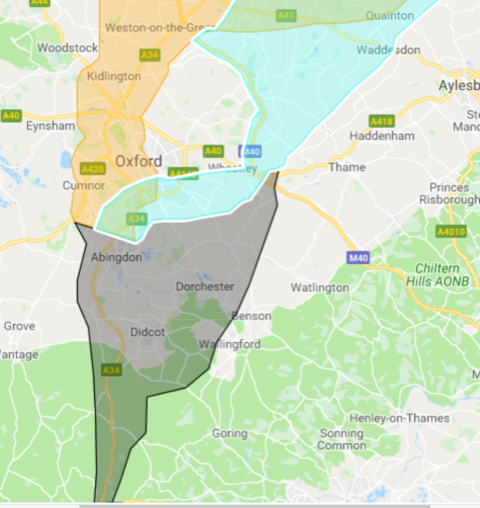 LEGEND: CORRIDOR B1 IN YELLOW, B3 IN LIGHT BLUE AND THE ‘COMMON’ CORRIDOR IN GREY which directly affects Dorchester and our surrounding area . (You can see that B1 and B3 overlap in the northern section above A41, that’s shown in Green)
For a zoomable map please click the link: https://www.google.com/maps/d/viewer?usp=sharing&mid=17uH8uf93WtT1hs49DYcgRXJIyrj8xXkH

The new Expressway routes which Highways England are developing and studying will run somewhere through the southern (grey) area and up through either B1 or B3, and on to Milton Keynes etc. Whichever corridor / route around Oxford is selected, the Expressway will run up from Chieveley through the ‘grey’ area on the map – it has been assumed that will be along the A34, but if / when / where it diverges is clearly not yet decided. The recent decision means that the original options for corridor A, C and B2 have now been rejected. The Government announcement on the central corridor decision is at :https://www.gov.uk/government/news/corridor-announced-to-unlock-full-potential-of-englands-economic-heartland

We now need to keep up the pressure on our Councillors and the OCC leader to listen to our concerns. A list which includes our MP – John Howell, our County and District Councillors and other key influencers is available on the Expressway Action Group website at : https://www.expresswayactiongroup.com

The Expressway Action Group, of which Dorchester are a member, will collect this data together and use our direct communications into Highways to make them aware of all the possible obstacles and barriers to the proposed routes. Every village and parish should start this as soon as possible: EAG have already spoken to Highways to make sure they will accept and review any EAG submissions, as they did with the 30+ reports which EAG parishes sent earlier this year (those EAG members’ submissions are already on the Highways’ maps for the next phase).

Since the Corridor announcement effectively begins a whole new on-the-ground survey process for possible routes in B1 and B3, and we’ve been told that all previous route studies are now obsolete, the task for everyone is to try and assemble as much wildlife / environmental / heritage evidence as we can in each of our member parishes. Highways England will now start a 12 month program of on-the-ground studies of potential routes within the remaining 2 corridors, and by Autumn 2019 they will be ready with a shortlist of 5 or 6 ‘best options’ routes which they will take into a Public Consultation.

This will be via a series of open meetings across the area where residents, businesses and environmental groups can express opinion on each route option, point out errors and omissions and generally participate / feed back to the Highways team. Our understanding is that the Consultation will be led by Highways’ routes team rather than via our local Councils (who in any case have mostly kept the public in the dark over all this).

We believe that one of the key deciders in final route selection will be the relative environmental and wildlife harm each route would cause – and during the 12 months that Highways are studying the 2 corridors for routes, they have said they will be looking not just at the ‘known’ wildlife reserves like Otmoor and the SSSI’s but also at unlisted sites with rare and special wildlife and habitat. We can help with this!

Highways have told us that all the wildlife / heritage and environmental data supplied so far to them via EAG’s portal has been added to their maps, and will influence the routes: but this extra 12 month field study gives all EAG member parishes and communities a new ‘window’ to send in more and better wildlife and other data to the Highways technical teams, so they know where to look for special sites and high-risk areas.

The sooner we can get this to them the better:
In Waterstock campaigners have been gathering wildlife evidence in their wetlands and river areas using static wildlife ‘trail’ cameras, and in Cuddesdon we’re doing the same, using low-cost cameras we found on Amazon for less than £60… Why not ask your local wildlife people where the best spots are, and join in? Let us know if you can help, and we’ll co-ordinate and submit to Highways’ team as before.

There is more detail on the Highways site including an Expressway Booklet available at : https://highwaysengland.co.uk/projects/oxford-to-cambridge-expressway/