David Burns grew up in north-east Scotland and now lives in Dorchester-on-Thames. He has published poetry in Agenda, Anon, Poetry News, The Oxford Writer, and the anthologies ‘East of Auden’ and ‘Cool and Quirky’. Much of his poetry explores themes of nature, landscape and history.

For Henge 19, I wrote a number of poems., each set at or inspired by a particular place in the Dorchester landscape. I tried to place the poems in prehistoric time, modern time, or ‘no time’. It was a challenge, in a good way, to write short pieces for the sculptures, and it was a spine-tingling experience to perform the poems inside the Henge sculpture on the evening of the equinox. 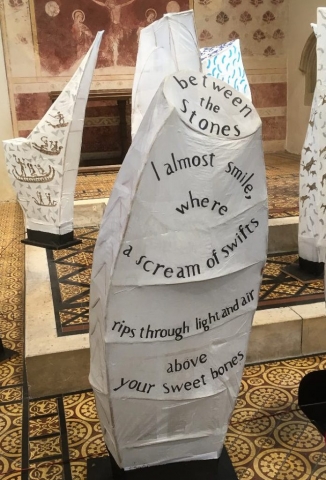 The bird was a big black target
every time it came up from a dive,
lower, slower and fuller of fish.

I watched Hunter but she stayed her bow
undrawn, arrowhead pointing down
as if she’d forgotten she held it,

then ‘Hoyy!’, she flung her arms wide
and the bird smacked up off the water
gained some heavy height and flew back over us.

‘Look’, said Hunter, ‘Just look’. And I watched
until its cross was a lump then a dot then
nothing, and Hunter motioned me into a crouch

laid aside her bow and said, ‘my father,
told me that his mother told him,
the fishing birds gave us the arrow.

We learnt the point from its bill
the shaft from its straightness,
the flights from its stiff wings.’

Hunter passed me an arrow, like many
I’d held before, but now it was different.
‘At the edge of the land,’ she said,

‘I saw the sour water rise into a ridge
and other fishing birds, great white ones
shot their bodies through it,

clean as flint.’ She stared at me.
‘Because they gave us the arrow
we never shoot them, do you know this now?’

I gave the yes sign, and waited,
hearing the wind in the river trees.
while somewhere above, a forktail whistled.

‘And anyway,’ she said,’ they taste horrible –
race you down to the ponds,’
and I chased her laughter through the high grass.

We scythe the stones clear
of wet sun-shot stems
Millions of sparkling gems
are the cost of hay this year.

Between the stones
I almost smile, where
a scream of swifts
rips through light and air
above your sweet bones

Under me are blood and bone
where will your pit be?
who will raise your stone?

Rain and the sun’s heat
we take and then give back.
Blood, we hold a little longer.

Free of all judgement and fear
what truth would you carve here?

The disc made by the stones and the spaces
between them are only the ground and air
that they were before, yet we stand and stare
into these less ordinary places.

Each long shadow
pegged by its stone
to the meadow.

And when we’re gone, the turning.
Stone teeth mesh with the familiar dark
wheeling the Hurst round towards morning.

Liminal – Confluence of the Rivers Thame and Thames – no time

The white noise of fast water fades
in, out then up as the river
transmits itself through air to call
me on more quickly, but instead

of rapids, the true surface glides, dead
level and mud-brown beneath the tall
willow and hornbeam that shiver
liquid sounds from a million blades.

Mid-way between the banks and I
stare down at me reflected on a screen
of steady clouds flowing upstream
over silt sinking into the sky.

We reach towards each other and I feel
his almost-touch thrill through tensioned skin
cleaving between. Nothing seems more real

than the feather, skittering, half-furled
on a thin breeze that scrapes a veil
across the depths of the underworld.

The face re-forms from splinters but I’ve gone
back into myself, wet, cold and alone.

A line of fence posts standing, stark and raw,
amidst machine-ripped turf where yesterday
nothing stood and cutting straight and dead
across the earthwork curves and hollows. They

are not wired yet; so I cross and re-cross
their line in small rebellion. Without knowing why
I hunker stiffly down at one end, sight
twenty posts into one by closing an eye

and forty years fall in upon themselves.
A line of red and white surveyor’s rods
runs across a Dorset hillfort and Bill
stands beside me, calmly instructs, then nods

when I set the next pole correctly
despite Malcolm (again) forgetting the sign
for ‘OK’, from his end. Bill sighs, winks,
moves on. Today we have ranging a line,

which is fundamental. Later, with steel tapes –
bastard things that cut your hands in a breeze –
and with three-four-five triangles and pegs
we set another line at ninety degrees

progressing – with a Pythagoras joke
from Bill – to a grid, and on to hachures
offsets, scales and the miraculous
growth of the earthworks as miniatures

on the drawing board. Suddenly
legible patterns, all the more astounding
because I made them. Thank you Bill,
Abbey and John, for that proper grounding.

Four decades then of this archaeology –
ordering rough walls, dirt layers and sherds
into neat drawings and clean texts I thought
should be authoritative, final words

though now I know better. Bill was long retired
and I had students, before I wondered why
cataloguing, ‘setting the record straight’
held such importance. So many of my

digger friends told me (over beers) that they too
came into this from messy lives and found
comfort and satisfaction from cutting
trenches in clean, hard lines. Which brings me round
once more to these tight-strung fences, aligned
against the fall and weather of the ground.