Just one minute of sitting with your car engine running and the vehicle not moving produces the equivalent of 150 balloons of harmful pollutants into the air.

This is why South Oxfordshire and Vale of White Horse district councils have launched a joint campaign to help improve air quality across southern Oxfordshire.

The campaign called ‘Turn it Off’ – www.southandvale.gov.uk/turnitoff – which has been endorsed by Public Health England – is aimed at drivers who leave their engines ‘idling’ – still running even when the vehicle is not moving. This often happens when a vehicle is parked but the driver is still inside, waiting for someone outside a school or a shop.

The councils will be promoting the campaign on Clean Air Day Thursday June 20 at a stall at Henley Market in the morning and at Old Station Yard, next to Stert St, in Abingdon in the afternoon. These will be followed by more awareness events across both districts.

Air pollution has been identified by a number of organisations including the World Health Organisation, United Nations and the Royal College of Physicians as the biggest environmental risk to health. A recent report from Public Health England estimated that within the UK, air pollution is linked to up to 36,000 deaths each year. Older people and children are most sensitive to air pollutants.

Keeping the engine running while parked contributes to an increase of air pollutant levels. Schools, traffic lights and bus stops are most likely locations for idling.

The councils’ new campaign ‘Turn it off’ aims to educate people about air pollution and the links to engine idling and promoting cleaner ways to drive.

South Oxfordshire District Council cabinet member for housing and environment Cllr David Rouane said: “The message is simple – if you are in your car and stop for a minute or more then you should turn off your engine for cleaner air.”

On Thursday 20 June – Clean Air Day – we will have stalls promoting the campaign at the following locations: 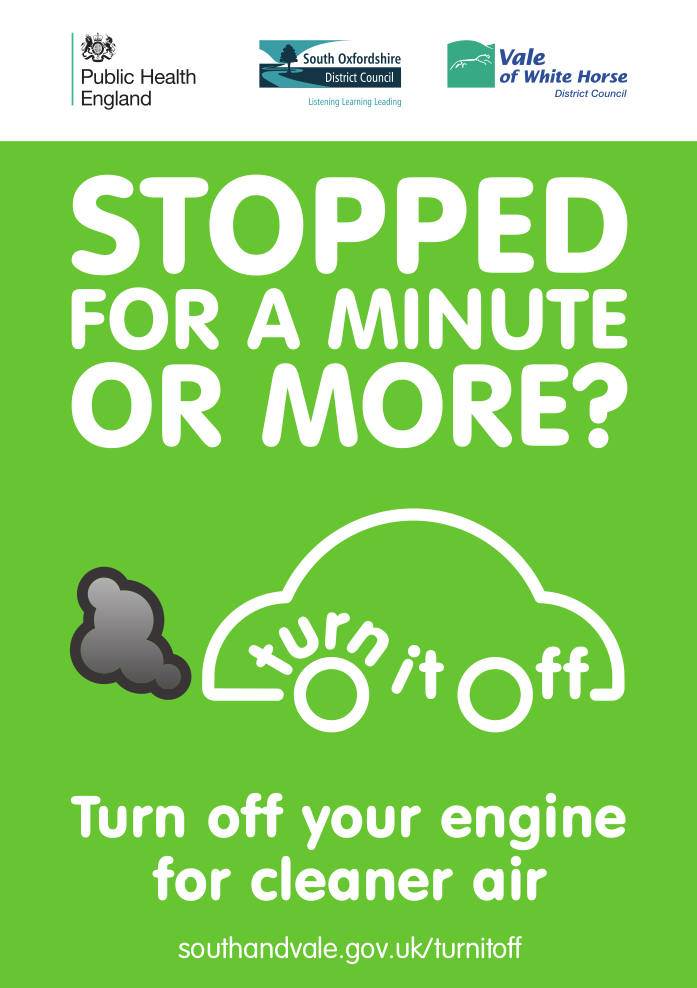 Posted on June 19, 2019 in Events in and around Dorchester