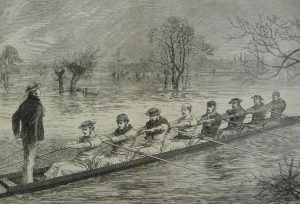 Although the first known inter-college race was held in 1815, competitive rowing was still a low-key affair in Oxford when Cambridge University issued the first challenge in 1829. That changed in 1843, when a seven-man Oxford crew won an unlikely victory and rowing displaced cricket as the pre-eminent summer sporting activity. In between, an unusual alliance of Town & Gown had seen Thames’ watermen and boatbuilders – some immortalised in fiction – crucially equipping and training the early Oxford crews.

Mark Davies is an Oxford local historian, guide, and author with an especial interest in the history and literature of Oxford’s waterways. He has lived on a residential narrowboat on the Oxford Canal since 1992 and has led towpath walks in Oxford for 20 years. Most of his talks focus on the waterways of Oxford, including literary themes (especially Lewis Carroll’s ‘Alice’, on which he has spoken as far afield as India), but his other distinctive specialties include: Oxford Castle; 400 hundred years of the Botanic Garden; and the local contributions to the origins of hot-air ballooning. He is currently assisting the Museum of Oxford in preparation for its reopening in 2020.