Fans of Agatha Christie, who lived locally at Winterbrook near Wallingford, will recognise many key elements from her 66 detective novels, including multiple murders and suspects. However, DADS Director, Sue Kitson says that, “This comedy whodunit succeeds because the central character, Miss Crusty, a famous crime writer, is not a slavish reworking of Miss Marple or, indeed, Agatha Christie herself.”

DADS regular, Christine Jones is playing Agatha Crusty, a sassy and confident crime writer, who has gone to visit her cousin for a “peaceful” break in a country village. But it is not long before she is called upon to use her expertise to aid the very incompetent  D. I. Twigg (Mark Williams) to solve a series of dastardly murders, seemingly all connected to the Village Hall.

There are many suspects including: Toby, the Vicar (Mark Wilkin); Eleanor, Chair of the Committee (Rosemary Mills); Harry the Caretaker (Ian Brace) and identical twins Olivia and Oliver Truscott-Pratt (both played by Rachel Winslet-Morris). Natasha Cornell is making her DADS debut in this production and observes, “It’s great to join the cast of Agatha Crusty, everyone has been really welcoming and we’ve had a lot of fun during the rehearsals with so many witty puns and one-liners.”

Agatha Crusty and the Village Hall Murders will run from Wednesday 21st to Saturday 24th June in Dorchester on Thames Village Hall. More information and tickets are available at www.dads.org.uk. 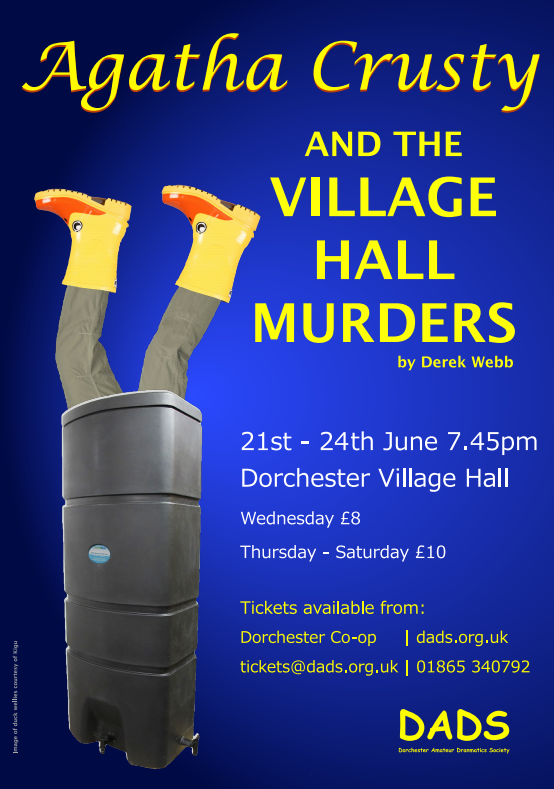 Posted on June 5, 2017 in Events in and around Dorchester