I took my degree at Farnham where I focused on painting and ceramics. Since then I have worked as artist in residence at Stowe School and have taught widely while also developing my own work.

“Always continue walking a lot and loving nature, for that’s the real way to learn to understand art better and better. Painters understand nature and love it, and teach us to see” – so said Vincent van Gogh.

I wholeheartedly agree with Vincent – walking and absorbing form the basis of my approach to art and are my means to discover history hidden in our unique surroundings.

I was pleased to be working on Henge with Adrian and fellow artists. I looked into the layers beneath the here and now and how these connect with the very different places Dorchester has been in the past. 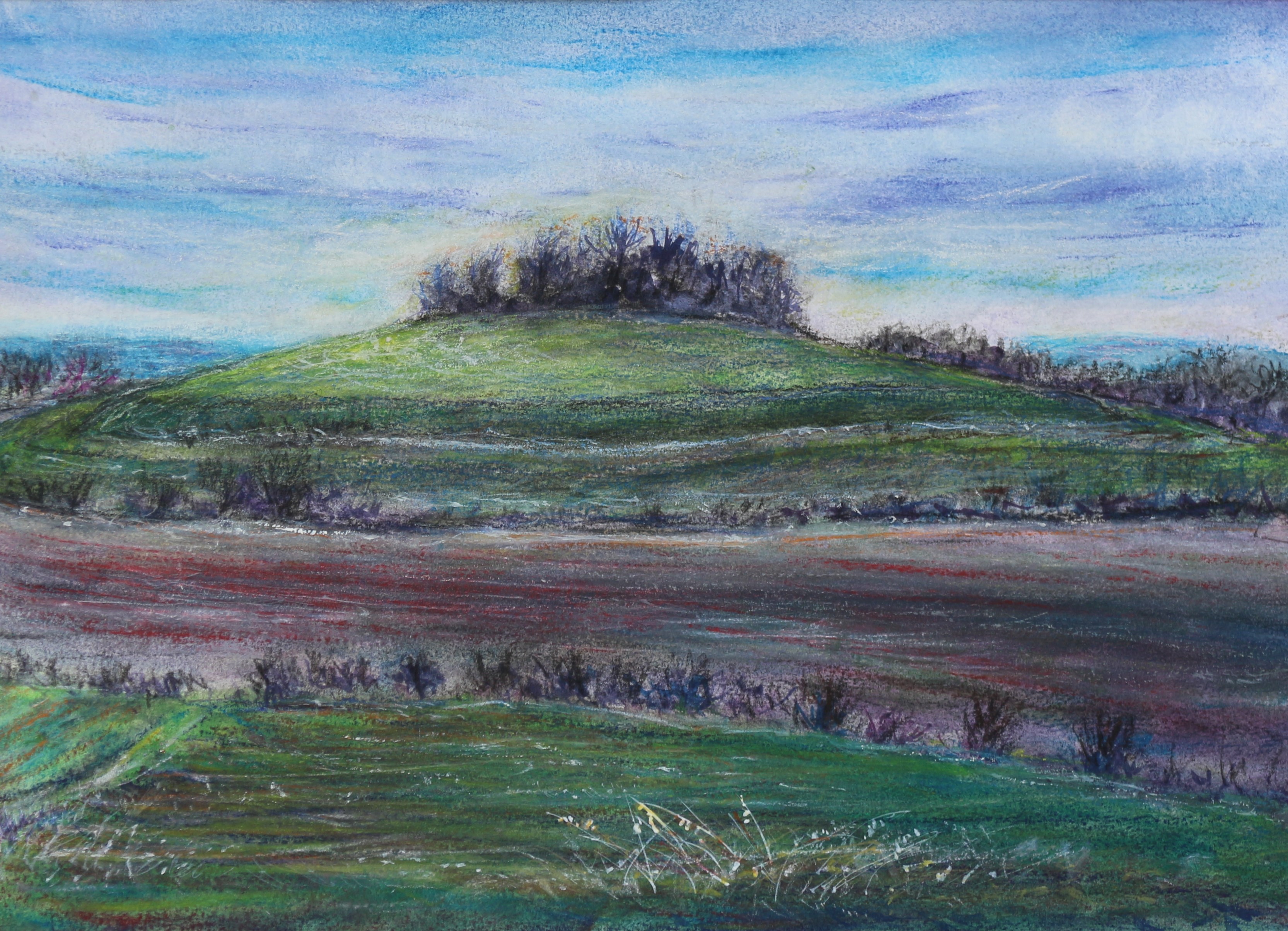 Hill of Words, by Rosie Southon

A dominant feature close to Dorchester is Wittenham Clumps. This is Round Hill together with Castle Hill, topped by an Iron Age fortification. Over the ages, many parts of our landscape have changed, but our ancestors would recognise the same hills next to the Thames even though they might have called them by older names. We also say Sinodun Hills which might derive from the Celtic for ‘old fort’ hills.

In the 1840s, local man Joseph Tubbs pondered the vista from the top of his beloved hills and composed a poem describing the past and present revealed before his gaze. On Castle Hill, over two weeks and in a way that would have broken all modern health, safety and environmental laws, he carved his two verses into a young beech tree. I like the way his tree grew, distorting his words. The beech lived long after he died, but decayed in the same way as much that he described in his poem. I first saw the tree, dead but still standing, in 1991. Later it was felled by a storm and rotted to nothing, but Tubb’s ideas and emotions survive all of this.

Around this hill the ruthless Danes intrenched
And these fair plains with gory slaughter drench’d
While at our feet where stands that stately tower
In days gone by up rose the Roman power
And yonder, there where Thames smooth waters glide
In later days appeared monastic pride
Within that field where lies the grazing herd
Huge walls were found, some coffins disinter’d
Such is the course of time, the wreck which fate
And awful doom award the earthly great

I love the less well known view of the Castle Hill from Barrow Hill which I often I see from a favourite walk. This gives a wonderful, evocative scene, showing the ancient hill fort set in our current landscape. To fulfil the Henge brief, I felt I had little choice but to paint my impression of the view and its sense of place.

When climbing the Clumps, I can still see much that Joseph described, but also plenty that has appeared since. Until recently, the main modern landmark was Didcot’s cooling towers. I see an analogy between their collapse and that of Tubb’s carved Poem Tree. The towers and their passing also prompt thoughts of our own place in the landscape and our effect on the world. While walking I often wonder what lines Joseph might have composed if he were accompanying me. I imagine that after our stroll, Joseph, with mallet and chisel in hand, would enthusiastically seek out a small tree and carve two new verses – after some prompting from me.

Below us cows wander on Isis’ green field
Sinuous Thames old Berkshire’s bounds does yield
Red shines the Abbey roof beyond the flocks
Grazing Dyke Hills, saved by Colonel Lane-Fox
And from our high place we consider our fate
It’s said the threat to our birthright is great
Lashing rains flood, scorching suns bake to dust
Preserve our landscape – as stewards we must
We know the damage we carelessly made
Act we must, lest our legacy should fade